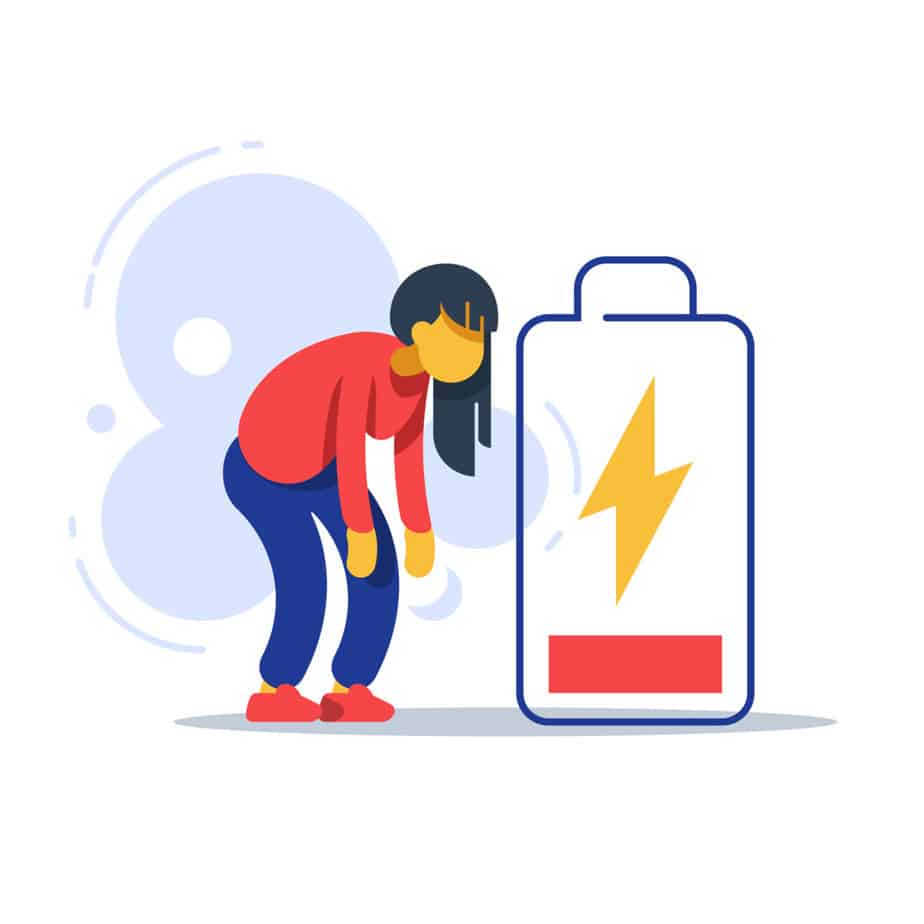 Why Does SVT Cause Fatigue?

Experiencing fatigue after an SVT episode is a common occurrence among people diagnosed with supraventricular tachycardia. I did some research trying to understand why this is happening, and I want to share with you what I have found.

SVT can cause fatigue because the fast heart rate itself is felt like physical exhaustion for the heart and body, preventing the cord from functioning correctly. The heart sends less blood throughout the body, and as a result, the brain lacks oxygen leading to exhaustion.

In addition to this malfunction of the heart, there are other factors that once the SVT happens, might aggravate the fatigue: dehydration, stress, various diseases, medication and lifestyle.

Recovery from SVT exhaustion depends on the body’s ability to cope with such a stressful event. Finding the right means to fight against this lack of energy becomes easier when you know the causes.

When the heart is beating harder for too long

If you have ever participated in a marathon, you know that after the event you need a day or two to recover because of the tremendous effort you put into it. Sometimes it can be the same with an episode of SVT.

The heart makes a massive effort to send blood to organs, and ineffective contractions due to fast heartbeats deplete the body.

After one heartbeat atria and ventricles relax and blood passively flows back into the atria. Then atria contraction occurs followed by ventricular contraction.

During an SVT attack, the heart beats so fast that it doesn’t have enough rest time between contractions. If the heart doesn’t relax, the chambers are not filled enough with blood.

As a result, when the next heartbeat happens, less blood is sent throughout the body. Less blood means less oxygen which causes shortness of breath and fatigue.

The duration of an SVT episode is directly proportional to the length of time you will feel tired. So the longer the attack, the longer the period of fatigue.

Our body functioning on low oxygen for a prolonged time could be dangerous. Here is why we have the recommendation to go to the ER if we find ourselves in an abnormal rhythm for a long time as it can lead to heart failure.

There are factors other than the SVT episode itself that influence fatigue. By knowing what these factors are and what impact they have on the heart, we will be able to cope with the annoying tiredness much easier.

Why does dehydration cause fatigue?

The consequence of dehydration is a decrease in blood volume circulating throughout the body and electrolyte imbalance.

The urge of urination after an SVT attack is prevalent and you can quickly get dehydrated if you are not drinking water to replace what you lose.

Electrolytes are chemicals that conduct electricity when dissolved in a liquid. The main elements are calcium, magnesium, potassium and sodium. Every cell in the body needs electrolytes to carry electrical impulses between them.

Therefore, electrolytes are vital for the proper functioning of the heart as they help in the process of energy generation and stimulate the heart to beat. Water is a huge source of energy for our body.

Given the impact that water has on the proper functioning of the blood circulation and the role it has in sending electrical impulses from one cell to another, adequate hydration may significantly reduce fatigue.

What you drink or eat could significantly reduce or increase the level of electrolytes in your body.

prevent minerals being absorbed into the body, so try not to have these indulgences during or after an SVT episode if you want to avoid tiredness.

You can increase the amount of electrolytes in your cells by having foods like banana, brown rice, avocado, raisins, potatoes, spinach, kale and mostly vegetables and legumes.

This type of symptom comes from personal concerns like stress, anxiety, excessive worry, and it is related to what you think. It occurs as a result of the brain being overworked. When mental overload reaches a climax, your ability to cope with stress is depleted; therefore, you lack energy, and a feeling of tiredness is present most of the time.

Is SVT ruining your life?

Maybe you have daily, or weekly episodes and you have got tired of constantly worrying that something terrible might happen. You might be exhausted, trying to figure it out when the next episode is going to be.

It might have been a struggle to get through every day, and the level of anxiety that goes along with it makes you not want to leave the house. When your heart is skipping, the fear of going into another SVT episode dominates your life.

If you have these scenarios and more happening in your life for months, your body may be in a state of chronic stress, which can cause fatigue.

Diseases and medication that cause fatigue

The presence of chronic illness like COPD associated with a stressed heart due to supraventricular tachycardia symptoms might hinder your energy level.

COPD is a condition where air penetration into the lungs is obstructed by chronic inflammation of the airways and makes breathing difficult due to decreased oxygen concentration in the blood.

I use a small device called digital pulse oximeter that measures pulse and oxygen saturation. It is cheap, accurate, and easy to use.

The optimal concentration of oxygen in the blood has values ​​between 95% to 100%. To keep our cells healthy, we need a blood oxygen saturation of at least 95%. If the oxygen level is lower than 90%, the blood doesn’t supply enough oxygen throughout the body, which will damage the cells and overload the heart, causing fatigue.

Oxygen concentration can be improved by correcting the posture. A poor posture characterized by rounded shoulders that close the chest and combined with a potty belly will compress internal organs. It leads to shallow breathing, restricting the intake of oxygen.

Holding the shoulders back will open the chest, and the diaphragm will have enough space to properly contract and relax with each breath and even increase lung capacity.

POTS is another condition that can lead to fatigue due to accumulation and stagnation of blood in the lower part of the body when we want to change position from lying down to standing up.

Blood pressure drops, and the pulse increases by at least 30 beats per minute.

Certain medications cause tiredness. In case you are taking beta-blockers, statins, antihistamines, antidepressants, proton pump inhibitors, antibiotics, or diuretics, take note that a lot of patients complain of symptoms like fatigue and lethargy.

If you are on medication of any kind, talk to your doctor to see if fatigue is one of the side effects of the drugs you are taking and ask what alternatives you have.

Make sure that besides the SVT episode, there are no other causes that will make you tired.

Be mindful to what you eat and drink before and after SVT as caffeine, alcohol, additives, refined carbs, soda drinks can contribute to your fatigue.

Fatigue can be alleviated by carefully monitoring and optimizing sleep, stress, physical activity and nutritional intake in the period immediately following the SVT episode.

A very efficient technique to get away with your tiredness is to lie down and put your feet up against the wall for 20 minutes a few times a day. The benefit of elevating your legs is that you encourage the natural flow of blood with less effort from the heart and oxygen can reach the brain more easily.

This is a position that could even break an SVT episode or give you an instant drop in your heart rate.

When you feel tired, do not give your heart extra activities but allow it to recover. Try to relax enjoying a massage, an Epsom bath, or practising a breathing technique and make sure you sleep throughout the night.

If the fatigue lasts for several days, and your legs are swollen and tired after you have been running around at work, sleep with your feet elevated 6 to 12 inches above your heart.

This position is beneficial to your heart as it facilitates better circulation. It prevents the blood from pooling in your legs and improves your ability to achieve a night of restful sleep.